The Second Word War was a terrible tragedy and although Sweden kept a neutral position in the war the effects were felt even in the northernmost part of the country. Even in Sweden, there were internment camps for politically undesirable individuals during the war. This is in parts the topic of my book: Storsien – 100 years in a village in Norrbotten

The village Storsien which is located in the Swedish Lapland is a paradox; an idyll but with a terrible past. During the Second World War an internment camp in the village hosted up to 350 people who labored there against their will. I have myself spent many summer vacations in Storsien and I have become fully initialized and oriented in how live was in the camp during the war. 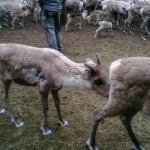 The story starts off with the character Amanda who lives on a farm in the small village of Storsien in the 19th century. Life is tough for Amanda in a time where the people are formed by hard work. One day while tending the farm she has an unexpected meeting with a stranger, the Sami Aslak. They develop a relationship but their love is forbidden and the choice to consort with a Sami has terrible consequents for Amanda. The story goes on with murder, abuse, and internment camp.